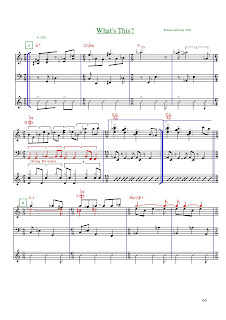 I was putting a copy of ‘Creative Rhythmic Concepts for Jazz Improvisation’, the book I’ve written on various rhythmic techniques, into an envelope the other day and was shocked to notice that it was first published 10 years ago. It really doesn’t seem that long ago that I received the first shipment of these books from the printer – I remember looking at what seemed to be a mountain of boxes and thinking to myself that twenty years from now I’d probably be keeping the majority of these books under my bed! But, to my constant surprise, the book still sells and people still seem interested in it, and it is in fact now in its third edition.

The fact that there’s still a demand for the book I believe says something about the rhythmic direction jazz has been going towards over the past 10 or 15 years. It would be great if I could claim that I predicted this move and set about writing a book that would cater to people coming to this new interest in rhythm, but that’s far from the truth. The origins of the book were far more prosaic and practical than they were prophetic.

The origins of the book

Almost twenty years ago I became fascinated with the possibilities of expanding my own rhythmic language and I set about investigating ways both to find rhythmic information, and to find ways of practicing this information in order to incorporate it into my playing and my music. I looked in many different directions for this information, finding lots of fascinating stuff in African music, Balkan music, Arabic music, Turkish music, contemporary classical music, jazz, and in particular, Indian music. I adapted this information in different ways, sometimes incorporating an idea or technique directly into my own playing or music, and other times adapting it or only using part of the information. In some situations I figured out my own ways of working on things that came from no other source than my own instinct and trial and error processes. All of this research and activity was directed towards my own musical development, as I assembled a collection of techniques and ideas that I could use and work with.

I never had any pedagogical intent when I started out on this road – it never occurred to me that this might be something that others would be interested in. That came a bit later, almost by accident. At the beginning I began working on my own and I was also fortunate enough to be able to work with two other musicians – my brother Conor on drums and the guitarist Mike Nielsen – who were equally into the idea of developing new rhythmic techniques, particularly as they related to jazz in general and standard playing in particular. So we worked away separately and together and put together a body of work and a rhythmic philosophy that we found worked for us.
And that was the extent of our ambitions as far as the rhythmic information went – to find something that worked for us individually and collectively and that we could work with and develop.

It was only as I began to discuss this rhythmic stuff with other musicians outside the trio, and outside Ireland, that I began to realize that what I was doing, and what the trio was doing, was not in the mainstream, and that I had uncovered a lot of material that was not commonly known in the jazz world. General reaction was a mixture of bafflement and enthusiasm, and a couple of musicians told me that I should, at the very least, start teaching some of this information and getting it out there. The great saxophonist Dave Liebman was particularly enthusiastic and encouraging to me in suggesting that I develop this rag-bag of ideas and techniques into a comprehensible package that could be put into a book and taught in schools. He continually prodded me – as only he can! – and stayed on my case until he convinced me that this was something I should do, and I’ll always be eternally grateful to him for that.

The eventual publishing of the book

And so I eventually did it – the first ‘edition’ was a kind of large pamphlet which I put together during a two-week family vacation in Cork in 1991 – which just goes to show you how much fun it is to go on vacation with me! A little while later I went into the studio with the guys from the trio and we recorded all the metric modulation examples that are still used on the recording today, (along with some of the odd metre material). When I think back on it now and realize that we recorded all those very demanding modulations without using a click track - and most them first takes – in one six-hour session, it makes me realize how rhythmically focused we were at that time. The results of that recording was issued on a cassette tape (remember those!?) that I sold at clinics along with the skeletal version of what would later become the rhythm book.

In 1998 I decided that there was enough interest in the kind of things that had been in the pamphlet to justify adding to it, recording extra examples and to make and print a proper book. So we went into the studio again and recorded more material and I expanded the previous techniques further, incorporating new examples and showing more possibilities for their development. I also added a listening list and some original compositions which used techniques discussed in the book. This book and CD was then published as ‘Creative Rhythmic Concepts for Jazz Improvisation’, and this, with the exception of a few additions and revisions, is pretty much the same book that is still in print today.

As to the reason why the book seems to be still relevant – I think it’s because, more by accident than design, it appeared at the same time as young musicians became genuinely interested in developing new rhythmic techniques and the study and playing of what could be called extended rhythmic techniques became more popular by the year. This growth in interest in such things as odd metre playing, multiple polyrhythms and metric modulation has multiplied year on year in the past decade, and where once playing a tune in 7/8 would have been considered wildly exotic, today I’ve heard 7/8 described as ‘the new 3/4’, so common is it in the repertoire of jazz groups. In such a climate of rhythmic interest the book has found a niche.

I think the other reason it still has relevance is the extraordinary scarcity of books and instructional material on rhythm. To a large extent it’s still the only show in town. I find it hard to believe that rhythm – arguably the most important universal element of music – has attracted so little interest from what could be described as the jazz education industry. In 1998 I shopped the book around to various prospective publishers and it was turned down by pretty much every major jazz education publisher, both in the US and Europe. All described it as being ‘too esoteric’ and obscure to make it worthwhile publishing. Time has of course proved them wrong and I’m now very happy to have published it myself, but I still find it amazing that ten years later they still don’t get it – books on harmony and chord/scale relationships proliferate like rabbits but, apart from drum books, there’s STILL virtually nothing on rhythmic technique, either basic or advanced.

And this hole in information on basic rhythm information one I’ve been aware of for a while. In teaching the more advanced material from ‘Creative Rhythmic Concepts for Jazz Improvisation’ I became aware that a lot of the problems people had in dealing with the techniques were more to do with basic time issues than with the techniques themselves. So in the course of teaching these workshops and clinics I began to create exercises that would help address these basic rhythmic problems. I now have quite a collection of these that I and other teachers at the school I work at in Dublin, (Newpark Music Centre) teach on ‘Rhythm Studies’ course on the the BA programme. The next obvious step is to put these into either a book or possibly an instructional DVD, and this is something I intend to do - it would be (or hopefully will be) a prequel, to use the cinematic term, to ‘Creative Rhythmic Concepts for Jazz Improvisation’. This is something I’ve been intending to do over the past two years, but am still unfortunately ‘getting around to it soon’. Large sections of my musical life over the past 10 years has been spent in the company of dealing with issues of rhythm and musical time – if only I could get a handle on temporal time in the same way I might have written a second book by now…………..


You can see a preview of ‘Creative Rhythmic Concepts for Jazz Improvisation’ here http://www.ronanguilfoyle.com/press.html
Posted by Ronan Guilfoyle at 10:23 AM