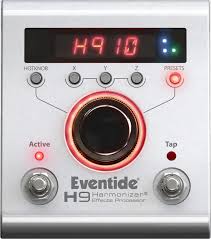 I've never been much of a lad for using electronic effects on my instrument. I added an octave divider to my setup about 20 years ago, kept it for a little while and then stopped using it. For one reason or another I've always been more attracted to trying to create all the sounds with my fingers rather than having them processed through an electronic intermediary. Having said that, I remember hearing the great Italian bassist Furio DiCastri do fantastic things with electronic effects on his bass back in the 90s and I remember thinking it would be fun to do something like that sometime.

I have a little issue with using electronic effects on my instrument, which stems from the belief that sometimes audiences can be fooled into thinking you're playing great music just by the sounds coming from your amp. And the sounds these pedals and effects units can make are really impressive. With the right patch or preset you can play just one note on your instrument and some massive sound can emanate from the amp, amazing one and all. But the problem I have with that is that the sound wasn't produced by me really, it was programmed by somebody else, and eventually made in a factory somewhere, so I feel a bit of a fake really, taking credit for something I actually had nothing to do with.

However recently I started to think about this again. I am aware that there are people, especially guitarists, who do extraordinary things with effects, very creative things, and one of those is the unique Swiss/Irish guitarist Christy Doran, with whom I've played on many occasions. Most recently I was playing with him and one of the leading drummers in the creative NY scene, Gerry Hemingway, in a concert in which all the music was completely improvised. Christy had his huge pedal collection ready to go, and Gerry brings all kinds of weird and wonderful hardware to add to the conventional drumset. I on the other hand had.... four strings...... The sound palette that Christy and Gerry had was huge, especially compared to mine - for me it was like bringing a penknife to a gunfight! 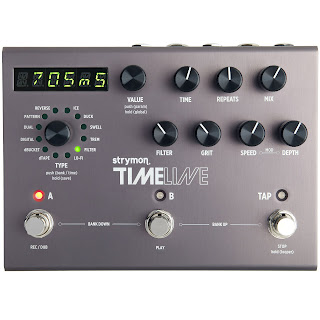 So that made me think a little - especially given the very creative way my fellow improvisers used their various effects that night. So I borrowed my son Chris' Strymon Timeline unit and fooled around with that and really had a good time with it. My modus operandi was to just randomly flick between presets and improvise immediately with whatever sound came out, and that was very engaging for me - trying to make some good music with the sound, on the spot, but not just accepting the sound as an end in itself.

I had so much fun with that, I invested in a unit of my own, this time the Eventide H9, and did the same thing with that. This unit has a huge number of presets and I've been exploring them with great interest in the past few days, and I'm confident that I'll be able to use this unit and incorporate it into some of the music I make. Can't see me using it on a bebop gig, but the next time I'm with Christy and Gerry, I'll be ready!

And secondly with the Strymon

Posted by Ronan Guilfoyle at 10:48 PM No comments: