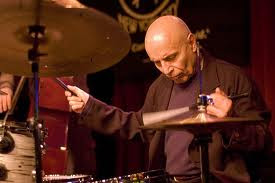 The passing of Paul Motian has again shown the truth in the adage that you don’t know what you’ve got till it’s gone.......... And reading the outpouring of tributes to Motian it struck me again what a shame it is that we don’t celebrate great people enough while they’re still around. Despite all the evidence to the contrary we seem to persevere in the belief that these people are immortal and will always be with us. Since his death, there have been been wonderful anecdotes about Motian from people who knew him – would it be so bad to hear all these kinds of anecdotes about great players while they’re still around? I definitely feel I’ve got a more rounded picture of Motian the man since his colleagues and friends spoke so honestly about him and how they felt about him.

There is little need for me to add more to the accolades that have been made about his playing – he was a truly great jazz drummer and musician and hugely influential, and we are lucky that he was so prolific in his performing and recording right up to the end. So instead of adding anything specific myself I would like to point you in the direction of some great online postings about Paul Motian:

Posted by Ronan Guilfoyle at 10:22 AM No comments:

Let's try and get the Mingus film made!

Despite how it may seem from the availability of everything on Youtube, jazz is scandalously underrepresented in the field of serious documentaries. Yes, there are good films on Monk, Miles, Coltrane etc. but in comparison to other genres such as classical music or rock, good jazz documentaries are thin on the ground. Kevin Mingus, grandson of one of the true greats of jazz - Charles Mingus - is trying to redress that balance a little by making a film about the legendary bassist and composer.

Posted by Ronan Guilfoyle at 11:29 AM No comments: