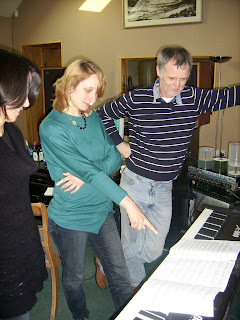 Spent yesterday in the studio with my new improvising chamber trio Trilogue.This is a relatively new group but one that's already real fun to play with and one with great potential. In the trio I'm trying to find a vehicle that can combine compositional rigour with improvising spontaneity - so far so good! 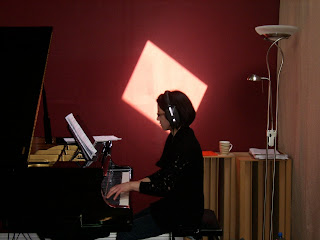 I wrote a little blog about the recording and the band and posted it on my website along with a rough mix of one of the tracks from the recording. You can see it here here 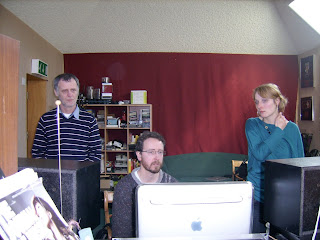 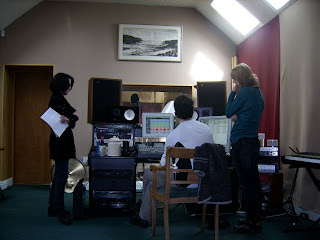 Posted by Ronan Guilfoyle at 9:37 AM No comments:

I finished the previous post by saying that if we can look after our music as best we can and then get it out there, we shouldn’t have to worry about what the pop music world is doing – but............... how do we get it out there?

I think we’re at an interesting point in the development of the way music is disseminated, in that the old combinations which were used to publicise and disseminate music – print media/broadcasting/recordings – are disappearing over the historical horizon and we’re entering a new world which, I believe, is very much terra incognita despite what the confident prognosticating of the online pundits might say.

One commonly expressed viewpoint is that what has happened regarding the disappearance of the old record company/jazz magazine hegemony is a great thing for all independent jazz artists since we’re no longer in thrall to vested interests which we can’t control, but are now able to control and shape our own destinies through the internet. Through the internet we can ‘maximise our fan base’ and ‘target our audience’ and get in touch with our fans worldwide therefore maximising our impact and ability to work as creative musicians. Well that’s a great scenario – in theory. But is this true? Is this what is happening? Are there musicians out there now who have made a breakthrough (and by that I mean become big enough names to be able to tour and be highly visible on the scene and attract audiences worldwide) solely via this brave new internet world? Has anyone used the confluence of website/Myspace/Facebook/Twitter/Youtube to enable them to make the leap from unknown toiler in the jazz vineyards to jazz household name - or what passes for a household name in the jazz world?

I don’t think so.

The biggest names around are still people who have made their names and reputations under the old system – Mehldau, Metheny, Hancock, Shorter etc. They may benefit from the new media and use it skilfully (or their record companies may do), but they are nevertheless products of the old regime whereby their music was picked up by a major record company and then publicised through the conventional jazz outlets of jazz publications and radio programmes. Even more recent popular acts such as the Bad Plus or Vijay Iyer have come out of the more conventional record label/jazz publication combination – their popularity and ability to reach their public may be sustained, or help to be sustained, through the internet, but their origins as a commercial entity are rooted in a system which is fast disappearing.

The received wisdom is that the disappearance of the old system is a ‘good thing’, allowing us to break free of the shackles of the record industry, and the self-appointed taste gurus, and to reach out directly to our public. But is this happening? In my experience, not really – or at least if so, in a very limited capacity. Under the old system if one worked hard and had some ability one had a shot at being a big enough fish in a small enough pond to be at least visible. Even if it was only around your own country (in the case of Europe) or your own local scene in the case of the US, you had a chance of gaining visibility through a recording that was reasonably well distributed, and/or well received in the jazz media. Now, rather than being any sized fish in any sized pond, one is swimming in a vast ocean populated by millions of other fish, all of whom have the same access to the attention of the other fish as you do.

In theory we now have direct access to our fans and to people interested in our music, but in practice it’s incredibly hard to make yourself heard above the din of all the other people clamouring for this same attention. Setting up a Myspace page is free, setting up a Facebook account is free, so even the rankest beginner can set up one of these pages and/or accounts and get their music out there. Which is all well and good, and one may argue that this shouldn’t concern the more experienced or accomplished player – after all quality will tell in the end, right? Well it might if it gets a chance to be heard. But how is even the most interested listener able to find the wheat among the chaff, find the kind of music they like, even the kind of jazz they like, among the thousands of musicians, the hundreds of thousands of pieces of music out there? Who has the energy to trawl through the internet in the hope of finding something they like? A few people may discover your music through the internet, but will enough of them discover it to make any difference to your chances of making a living?

Under the old system finding music you liked or might be interested in was a simpler affair – you bought magazines and read the reviews, building up a trust in certain reviewers through experience, knowing they they could point you in the direction of stuff you might like to check out. Or you might find the music recorded on a certain label to be generally in the musical neck of the woods that you like to inhabit. This system focussed the attention and helped direct the listener towards music they knew and music they might not know but may enjoy discovering. Of course in theory this is even more true of the internet – all musical life is there, but the problem is that there’s just so much of it! How does the new listener make sense of the plethora of music and musicians out there, and how does the jazz musician get the attention of this new listener? I don’t know!

This is not a lament for the old system – it was riddled with problems such as very poor journalism and lack of knowledge on the part of many critics, and the exclusivity and fashion consciousness of many labels meant that some deserving people never got a fair shake. But has the internet redressed this situation – does the genuinely creative artist have a better chance of exposure under this new system or is it even harder for them due to the sheer volume of people who have the same access to the internet for promotional purposes?

I honestly don’t know, but all I can say is that I’ve yet to see a new jazz artist who’s been ‘broken’ by the internet. Whose value was spread across the jazz world by electronic word of mouth.

I believe that my music probably appeals to a few thousand people across the world, but despite my use of the now traditional tools of the internet I also believe I probably reach only a few hundred of those. And I don’t really know what the answer is on how to bridge that divide between the interested people who are genuinely receiving the message and the much larger number who aren’t. I do believe there’s an answer somewhere – there’s a way of getting people to the gigs and alerting them to available recordings, but we haven’t cracked it yet. Plenty of food for thought, but in the meantime I have to try and put food on the table!
Posted by Ronan Guilfoyle at 10:53 PM 5 comments: