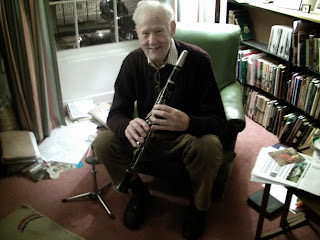 Recently, one of the first Irish musicians to take jazz seriously and treat it with the respect it deserved - the saxophonist, trumpeter and Ellington scholar Chas Meredith, passed away. In the way of these things, his generation is passing from the scene,  but I think it's important for all musicians in any scene, no matter how large or small, to mark these occasions and recognise where we come from, and the people who made it possible for us to do the things that we do.

As someone a couple of generations removed from Chas’ musical circle, at first I wasn’t very aware of him as a player, though I did know, through his close friend John Wadham, of his expertise in all things Ellington, and at first this was my image of him – as a scholarly man with a passion for Duke Ellington. Then I got to know him, again from a distance, through his jazz radio programme on RTE, where I realized he had much broader tastes than only listening to Ellington, and I heard much great and, to me, unfamiliar music on his programme. Chas had a perfect voice for radio - measured, clearly enunciated, and with a neat and often droll turn of phrase which could be wickedly funny.

As anyone who knew him will remember, he did not mince his words if he didn’t like something, and even the great and good of jazz weren’t immune from Chas’ criticism if he felt it was warranted. I particularly remember a programme where a new Dexter Gordon album had come out, and Dexter at the time was the darling of the critics, having made a high profile return from European exile to his American roots. However Chas didn’t care for him, but felt duty bound to play a track from the album. 30 years later I can still remember the introduction delivered in that wonderful voice: ‘So, here is Dexter Gordon, playing with Johnny Griffin – the sleeve notes don’t tell which man solos first, and frankly, I don’t care…….’ 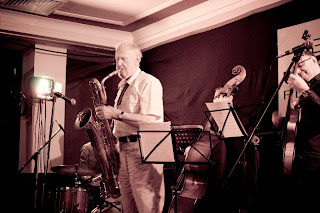 I finally got to know him in person, when much to my surprise, he called me to sub in his band – a group that played Ellington small band arrangements, which would not have been my area of expertise. The fact that I played bass guitar rather than the more conventional double bass didn’t phase Chas at all, and showed how he cared more about the music than any perceived orthodoxy of how it should be played. It was a terrific experience for me as a young musician and I learned so much about this music and how it should sound if played well – and since the band was lead by Chas’ he ensured the music WAS played well.

It was also my first experience of the famous Chas count-in, which any musicians who knew him will, I’m sure, be familiar with – ‘Right gentlemen – straight in, and ultimately, straight out again’

It was also my first introduction to his wonderful playing and mastery of two completely unrelated instruments – the saxophone and the trumpet. This is a doubling that is rarely seen, since the physical requirements of it are so different. But Chas surmounted these difficulties with ease, an extraordinary thing for a part-time musician, who had so many other calls on his time, to be able to do. Chas was a natural musical talent, and one can only imagine what could have been if he had devoted himself full time to music.

Here he is on baritone, playing an unusually slow version of 'Sweet Georgia Brown', with some of his colleagues from the same generation, in a recording made in the mid 1990's when Chas was in his late 60s

From getting to know him musically, it became clear to me that when I needed someone to talk to the jazz students at Newpark about Duke Ellington, that he was the man to call, and anyone who was in those classes will remember the erudition, the insights and the sheer entertainment of those talks, and the life and context that Chas brought to them, elevating them far beyond a mere classroom talk, and into the realms of riveting living history.

From then on we became quite close musically, and had many a get-together where music was discussed, and as always I was both entertained and educated by the sheer depth of knowledge he had about jazz and the passion that he brought to every discussion of it. He was also tremendously generous with his time and enthusiasm, and I think generosity and doing what he believed was right were two of the hallmarks of his character. I think the way Chas became involved in helping John Wadham in John’s last years, was a classic example of Chas’ energy, determination and generosity. 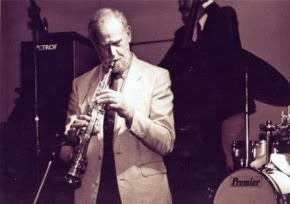 One plan I had, which never came to fruition, was for Chas to come to the school and to give a talk to the students about his life and the history of Irish jazz, both of which are inextricably intertwined. So when Chas called me last December and told me he was unwell and the prognosis was not good, I asked him if he would allow me to interview him about his life. To my delight, he agreed and I spent three hours with him, listening to him, and recording him telling me about his life and, since it was so closely wrapped up in that, how jazz developed in Ireland. (The picture at the top of this piece was taken at that meeting)

He had an extraordinary memory - no detail escaped it and I learned so much about the history of the music in this country. I even learned some personal history that I didn’t know about when Chas told me that in the ‘50s, he and my father - another jazz fan, would slip out of their respective offices - Chas from his legal practice, my father from New Ireland Assurance company – and meet at a café called the Wagon Wheel and compare notes and the latest news from the jazz world.

In recent months I stayed in touch with Chas and he very generously gave me much of his musical memorabilia, including much very valuable material that will be important when the full story of Irish jazz and the people who made it comes to be told. He also gave me many scores and arrangements of his, and this year at the school, we will recreate his small Ellington band arrangements using students from the school, and perform them in public – something which I think will be very apposite in remembering this remarkable man, and I’m very glad to have been able to tell Chas about that before he passed, and I know he was very happy with the thought of the music living on through new generations.

And these new generations, and my generation, have so much to be grateful for to Chas, and his colleagues, who blazed a trail for a music that was universally loved but flew very much under the radar in Ireland. If it wasn’t for him and others like him, Irish jazz would be never have developed as it has, and we should all be grateful to these wonderful musical pioneers who gave so selflessly for so many years.

Finally, here is an excerpt from the interview I did with Chas in which he tells the extraordinary story of how Gerry Mulligan came to stay at his house for a whole summer in the early 1970s. All the hallmarks of Chas delivery are here - the sonorous voice, the brilliant use of language and the sense of humor. His joy at the recollection of this amazing event is also clear.