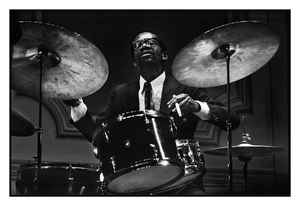 I wonder how many people reading this know who Jimmy Hopps is? Not many I'd guess, and it's a pity. Hopps was a great drummer who was very active in the late 60s and early 70s with people like Pharoah Sanders, Roland Kirk, Stanley Cowell, and later with Sun Ra. But I know him particularly from the albums he made with Charles Tolliver, the great trumpeter, who is still performing today.

My favourite recordings from this 60s/70s period are 'The Ringer' and 'Live at Slugs', both of which also feature Cowell, and either Steve Novosel or Cecil McBee on bass. Hopps' playing is so dynamic and forceful, he drives the music onwards and deals the cards throughout. There's nothing slick about his playing, but it has the drive and raw power typical of this period in jazz, and an intensity that's sadly missed these days. Both of the aforementioned albums are hard to get, but worth the effort.

Considering 'The Ringer' was recorded in '69, and given the normal lifespan of jazz musicians of this period, it's amazing that all are still alive and, with the exception of Hopps, still playing. Hopps withdrew from music and was last heard of traversing the Sahara with the Bedouin. How's THAT for a career change!

Posted by Ronan Guilfoyle at 7:47 AM No comments: