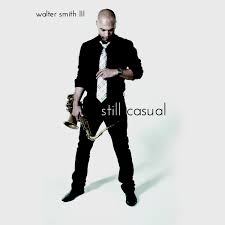 As I mentioned in my previous post 'Contemporary Music', as you get older, (and I'm only speaking for myself here), you're not as obsessive about checking out every new album that comes out. Of course, these days, much more music is being released than at any time in human history, so it's not really possible to keep up with everything, even if you wanted to. In addition there is a lot of classic music from the past that is such a pleasure and inspiration to revisit, the task of listening to all of that, as well as the latest work from younger musicians, becomes one of Herculean proportions.

Having said that I do try and keep an ear open to new things in the jazz world, especially if they're from people whose previous work I have admired. In recent times I've come across three outstanding recordings, which I return to again and again. This is always the ultimate barometer of course - do you re-listen? With so much music pouring into your computer or iPhone, or FB feed, or Youtube/Soundcloud channel, it's very easy to listen to something just once and move on with a shrug of the shoulders. If you find yourself listening again and again to something, there must be something special going on (at least for you), to make you extract these from among the stampeding herd of recorded music galloping across your aural landscape.

And this is certainly the case for the three recordings I'd like to mention here.

Recorded with some of the finest players on the contemporary NY scene (Matt Stevens, Taylor Eigsti, Harish Raghavan, Kendrick Scott, with Ambrose Akinmusire guesting on a couple of tracks) , this a recording full of incident and wonderful playing. Listening to this you realise that the technical level of the playing in jazz, (especially in NY, but also elsewhere), has never been higher. The compositions on this album are so demanding on the players in all departments - rhythmically, conceptually, harmonically, and melodically. Yet the even the gnarliest chord progressions and spikiest rhythms are negotiated with ease, the technical prowess of the players allowing them to reach the music quickly and directly. This music is very difficult, but only a musician would know that. To the casual listener this is a lyrical and flowing album - which is how it should be, the playing here is the art that conceals art.

I'm particularly impressed by the compositions, the variety of grooves and tempos and the clarity of the ensemble sound. In general it's what I think of these days as being modern mainstream - very lyrical, lots of straight 8s rhythms, and an overriding melodic sensibility. My only minor cavil is that I would like to have perhaps heard the players stretch a bit more - they're all such great soloists and sometimes the solos finish just as they're about to get going. As a musician myself I understand there's a trade-off you have to negotiate all the time while deciding what and how to record - do you have less tracks and more blowing, or more tracks and constrain the solos? Smith has gone towards the latter decision with eleven pieces and shorter solos. And I'm grateful to hear all these great tunes, it's just that occasionally I'd love to have heard the players stretch more. I guess I need to hear the live shows.

There isn't one redundant tune here, but particular favourites for me are 'Processional' in which a long stream of 8th notes creates a wonderful unfolding line over a slower chord progression, (reminding me strongly of the 2nd Movement of Claus Ogerman's 'Symbiosis'), and the spectacular 'Foretold You' If there's a more attention-getting first track to a recent album I've yet to hear it. You can see Walter Smith III talking about this on the clip below.

The next recording I'd like to mention is cut from a very different cloth, John O Gallagher's 'The Anton Webern Project' 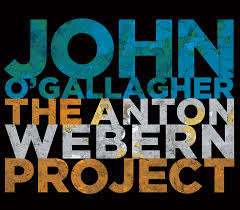 Again a stellar cast of players has been assembled for this recording - Matt Moran, Pete McCann, Russ Lossing, Johannes Weidenmueller, Tyshawn Sorey and Margret Grebowicz. This is a hugely skilled group, and they need to be to negotiate the music, which operates out of an entirely different aural landscape to that of the Smith recording. These are adaptions of the music of the great serialist composer Anton Webern, whose pared down compositions are here given a more filled out environment by the way O'Gallagher has arranged the music, and the instrumentation he has used to realise his project.

And this is a very ambitious project, in which John asked himself, “what would Webern’s music sound like if he were a jazz musician living in New York City today?” Whether the answer to that is given here or not is beside the point. Maybe others would be interested in how faithfully the source materials are translated into the jazz idiom, but for me what really matters is the resultant music, and this is really strong, characterful and individualistic. There's a certain atmosphere to this music that pervades each piece, which can no doubt be attributed to the use of serialist techniques in arranging the music and as an underpinning to the improvisations. Transplanting Webern's sometimes spare and astringent compositions into the narrative world of jazz is an interesting project to undertake, and in this case has resulted in fascinating music that uses the collective sound of the band to great effect. In fact, on the first track 'Schnell (after Opus 27)', and occasionally elsewhere on this CD, I'm reminded of the kind of collective energy created on the Miles 'Bitches Brew' period  - the churning rhythms and use of the electric organ really evoke that atmosphere for me. And I think it's the combining of the grooves of contemporary NY jazz with these angular melodies that gives the recording its unique character.

From a playing point of view too, there's so much to admire - all of the players are great soloists, Margret Grebowicz does a brilliant job on the technically very difficult songs, and the extraordinarily effortless drumming of Tyshawn Sorey underpins everything and drives it forward. Particular standouts for me are the phenomenal keyboard solo by Russ Lossing on 'Schnell', and John O'Gallagher's playing throughout. John is someone who is very well known and hugely admired by musicians, but really deserves to be much better known to the listening public. The fluidity and clarity of his playing in even the most demanding of contexts is a wonder to behold.

Here's an example of the group playing two pieces from the recording - check out Tyshawn Sorey, playing without written music, nailing everything and looking as relaxed as if he were taking a warm bath......... 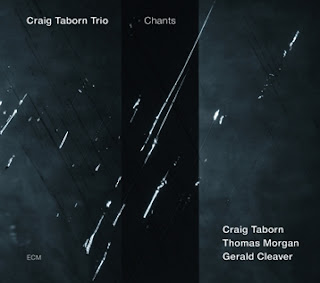 I think in years to come this recording, with Thomas Morgan and Gerald Cleaver, will be recognised as a masterpiece in the canon of jazz piano trio recordings. Since I first got this recording I've listened to it obsessively and I never tire of it. Every listening reveals more. So what's so special about it?

Firstly the atmosphere created by the trio that runs through every track makes the whole CD one self-contained work, that though it's not designed as a suite per se, is obviously the work of a unifying collective intelligence (the trio), guided by the compositions of an individual (Taborn).

Secondly the organic way the trio play together and play effortlessly through the various challenges of the compositions. Each member of the trio contributes equally to the music and there is never a moment where one player is subservient to another.

Thirdly, Taborn's playing - as always he brings a crystalline brilliance to everything he does and it's hard to think of any player, on any instrument, whose playing is as cliche-free as his. He's completely unique, yet not 'quirky' nor iconoclastic in the way that some innovators are. He achieves his individuality by the freshness of everything he plays, the ceaseless invention of his improvising, and the fluidity with which he executes his ideas. He is clearly a jazz pianist, but I'd find it hard to point to his influences. There's a concern with sonority that seems to come from the classical world, and his rhythmic approach clearly comes from contemporary jazz, yet it's very difficult to see a specific piano lineage from which he has sprung. In that way he is unique.

And finally there are the compositions. Such variety of approach - from the rolling counterpoint of 'Chants', to the patience of the beautiful 'In Chant'. From the the clave-inflected power of 'Hot Blood', to the obsessive repetition of 'Beat The Ground'. In this latter piece Taborn shows off one of his trademarks - the ability to keep a complex left-hand ostinato going while the right hand improvises freely and brilliantly.

The recorded sound on this is gorgeous too - lots of reverb (as one so often gets on ECM), which may not appeal to everybody, but there's so much warmth and depth to the sound too, that the effect of the whole is just one of great resonance and presence.

I've written before about Craig Taborn, and for me he's just the most interesting contemporary pianist on the scene today. He plays in all kinds of ensembles as a sideman and is always outstanding, he can play in a 'changes' context, (such as with Dave Binney or Dave Holland), in more open contexts (such as with Tim Berne), or in electric situations (with Chris Potter), and in all of these environments he brings complete individuality while always serving the music. Although widely recorded as a sideman, his own output is quite small, and when you hear this album, you realise that the paucity of recordings under his own name is a real shame.

He mentions in the clip below that he feels no urgency about documenting his music, and likes things to gestate before he considers recording them. For myself, I think it's a pity - he has so much unique music to give, I would love to hear much more from him in his role as leader. If you have any curiosity at all about the contemporary piano trio in jazz you definitely should listen to this. It is a recording that just keeps giving, no matter how many times you listen.

Three different recordings, all using different approaches, and all valuing composition and improvisation equally. Pay no attention to the naysayers - jazz is in rude creative health.
Posted by Ronan Guilfoyle at 11:23 PM No comments: