If you're a jazz listener you'll definitely have been at a concert dedicated to the work of a musician or composer, and if you're a jazz player you'll definitely have taken part in one. These kinds of projects are very popular both with performers and audiences, for various reasons. When you do a concert of the music associated with a well known figure, you're dealing with a known quantity - it's music that has usually already been acclaimed in the public arena.  So for an audience, to see a concert labeled as, (for example), 'The Music of Miles Davis', they already have an idea, at least in their own minds, of what to expect. If they are fans of Miles they'll possibly be more interested in going to see that concert than they might be if the concert was one comprised of original compositions by the leader or band members. By evoking the name of Miles, the leader is to some extent using the popularity and name recognition of Miles to encourage people to attend. And therein lies the problem - at least as far as the aesthetics of the music go. 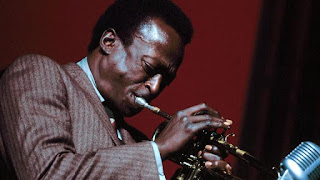 If you are a creative musician, in the true spirit of what that means, in my opinion it's not really good enough to present an evening of the music of someone else, or music associated with someone else, and present it in such a way that a) you don't do anything other than try and copy the original, and b) imply in your publicity that you had something to do with the creation of that music. To use the artistic credentials of someone else to get gigs or present yourself as having some connection to the artist in question, simply by playing their music, is artistically bereft of merit. I don't mean to say that you shouldn't play anyone's music other than your own, but I do think on an artistic level, that if you're going to play someone's music, and evoke their name, the very least you can do is to create some personalisation of that music, in such a way that the audience coming to the concert will hear this music in a very different way to that of the original.

Jazz is a music in which the work done by musicians of previous generations laid the foundations for future musicians to create their music. By taking the music of somebody and slavishly trying to reproduce what's on the recordings, you are flying in the face of that tradition. Not that there's anything wrong with playing music that people love, for people, in a way they will recognise. But it must be seen for what it is - if you've put together a 'project' that tries to reproduce known music in the style in which it was recorded, then you are essentially leading a covers band, no different in its own way to 'Abba-esque', or 'Iron Maidens' or any one of a multitude of similar covers bands. You are, in a way, creating a live jukebox. Very often I've seen musicians refer to their 'Miles Tribute', or 'Miles Project' in a way that implies that they have some ownership of the music. Yet when they perform, it becomes clear that they're simply trying to reproduce what Miles did (impossible in itself), and there is not one iota of originality in the project at all.

I'm also wary of using a photograph of the musician who is the subject of the tribute as part of the publicity. Again, by using his or her photo, there is the suspicion of the leader of the project using this imagery to draw the crowds, almost as if the famous artist themselves were going to have some part in the performance. Of course if you play the music of someone else, it's impossible not to mention that fact in the publicity, but if your publicity comprises a large image of the composer/performer whose music you are playing, and contains no photo of you, then from my point of view this very problematic - at least as far as presenting the show as being something in which you have had a creative input. Using a photo of yourself alongside the dedicatee of the evening can also be problematic, as it can imply a certain collegiality between you and the artist that doesn't exist. There was a particularly shameless and notorious incident of this nature here in Ireland some years ago when a saxophonist who was touring a John Coltrane project, Photoshopped an image of himself and Trane so that it looked like they were on stage side by side. Toe-curlingly awful and an extreme example of the exploitation of an iconic image for personal gain and under a cloak of a 'tribute'

Of course learning repertoire is part of the process of learning to play this music, and all jazz musicians do it and need to do it. But there's a difference between learning a canon of work in order to develop as an artist, and presenting it by-rote as if you have some part in the creation of it. If you're serious about creating a body of work that both reflects the music of a great musician and contains some creative input from yourself you need to do something other than simply try and copy the music from the recordings.


The trumpeter Dave Douglas has always been very imaginative in this regard, producing homages to Wayne Shorter, Booker Little and Mary Lou Williams, while at the same time creating a body of work that is clearly his own. As an example of this approach, have a listen to the original recording of 'Mary's Idea'


And now listen to Douglas' interpretation of that - it both clearly shows the source material yet makes the a piece, that was written by somebody else in 1930, sound both personal and contemporary

When I was starting out as a player I began putting on concerts of the music of particular composers - Monk, Bill Evans, Wayne Shorter, at the wonderful Focus Theatre, and I admit that they were not the most original things I've ever done, and would be guilty of many of the sins outlined above. I was in my early 20s then, and hadn't really thought this stuff through. As I matured and became more experienced both in music and in life, I changed my approach to these kinds of projects completely. One of the first projects I did as a mature musician was a recording (and tour) of a project called 'Bird', dedicated to the music of Charlie Parker. My criteria for choosing the music was that it would be comprised of music either written by, dedicated to (by other composers), or made famous by Parker. Once I'd chosen the music I set about personalising the pieces in my own way. I looked at each piece and examined them structurally, rhythmically and harmonically to see if I could find new approaches to what was extremely familiar material. Here's an example - the Dizzy Gillespie classic 'Blue N' Boogie', played here by Miles Davis.


The re-arrangement I did of this classic blues pieces was very simple, I changed the groove from swing to a quasi-reggae feel, thereby preserving the triplet vibe of the piece while having a different groove. I wrote a bass line, slowed the tempo, added an intro, and changed the rhythm of the melody, stretching some of the phrases. The blues form, and key were preserved, but the atmosphere is very different to the original.

After one of the performances of this project an audience member approached me and said he was very disappointed by the concert because he was hoping to hear the music played the way it was on the records. While sympathising with him, I did make the point that nothing could better the way the music was played on the original recordings, and to try and reproduce it live would just produce something vastly inferior to the original. Nobody can play like Charlie Parker better than Charlie Parker....

Here's a live recording of another of the 'Bird' project tunes, (with Julian Arguelles, Rick Peckham and Tom Rainey), this time Parker's 'Ah-Leu-Cha', where I've used canonic devices in the melody, added a bass line and used a New Orleans groove. Again I was trying to be respectful to the source material while being personal.

I think ultimately the point is this - from an artistic point of view, are you using whatever great music you've chosen as a springboard to creativity of your own, or are you being a 'greatest hits' artist? We definitely need more of the former than the latter.
Posted by Ronan Guilfoyle at 9:17 PM No comments: