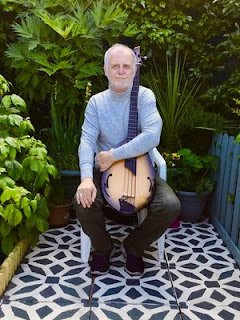 Hello Everybody  It's been a while since I've been on here, so I though I might update you with some news. Like performing artists everywhere I’ve been trying to stay creative during the pandemic and find ways to keep moving forward. It’s difficult when it’s impossible to perform with others, and I’ve found it as challenging as everyone else in this regard. Hopefully with the new vaccines we’ll finally find our way out of this and be able to get back to some sort of normal musical life and be able to play with and for people again.
In the meantime, I’ve been keeping as busy as I can with practice and composing, and getting involved in some other musical pursuits such as collaborating online with other artists, and making podcasts.  In late 2019 I took possession of a beautiful Marcustico bass, (pictured above), and though, due to the pandemic, I’ve not had a chance to play it with others, I have been practicing with it a lot, and have released a solo album with it on Bandcamp which I’m very happy with –  it has a beautiful sound, and you can listen to and download it HERE.
The podcasts I’ve been making have been on the Mixcloud platform, and I’ve done one on the great Woody Shaw, one celebrating complex music, and an interview with the legendary saxophonist Pat LaBarbera, speaking to him about his time with Buddy Rich and Elvin Jones. You can hear them all HERE. I’m working on putting together a major podcast series on rhythm with interviews and discussions with great people, so watch this space!
In terms of collaboration online, I’ve done several videos with other artists which were a lot of fun to put together, and I’ve uploaded those along with some solo bass things on my Youtube Channel – you can see them HERE.  Here's an example - a duo piece with the wonderful Swiss singer Kristina Fuchs playing a fun piece of mine called 'Guile'
So that's it for now, hopefully I’ll be able to let you know about some performance dates in the not too distant future, but in the meantime let’s all do our best to stay positive and creative, support music whenever we can, and of course stay safe!  Ronan
Posted by Ronan Guilfoyle at 10:43 AM