Land of the Free? Ha! 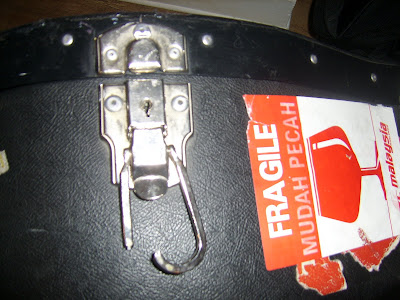 It’s extremely galling to have the instrument that you use to make a living smashed by some oafish cretin in an airport. It’s doubly galling when it’s smashed as part of a ham-fisted and totally unnecessary “search” perpetrated in the name of public safety.

I’ve just returned today from teaching in Berklee College of music in Boston for a week. My acoustic bass guitar is far too large to fit into any overhead compartments in an airplane cabin, so I have a custom-built case made for it which allows it to safely travel in the hold. I check the bass in as baggage, and only once since I got the case in 1999, have I ever had any damage to the instrument. On arrival at Logan Airport yesterday I locked my instrument case as usual and checked it in without mishap — but when it came out the other end in Dublin, I was horrified to see the case was only being held together by tape. A quick examination of the case found that all the locks had been smashed deliberately — a note from ‘Transportation Security Administration’ at Logan confirmed this. I just had the case serviced two weeks ago to make sure that it stays in top condition for the protecting job that it has to do on virtually a weekly basis, and now here it was two weeks later with every lock literally smashed. But worse was to come — on opening the case I found that huge crack had appeared on the front of the bass, obviously caused by the mindless gorilla who was forcing open the case. On consultation with my Luthier it seems that this is going to cost approximately €500 to fix. And then of course I’ll still have to have the bass case repaired. 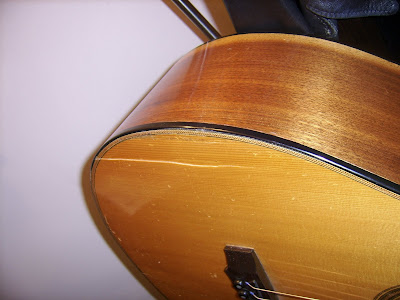 I travel all over the world with this instrument and case — in the past eight months alone I’ve been in Belgium, Vietnam, Malaysia, Brazil, Switzerland, and the UK. In all of this time and through all of these airports, the case has passed unscathed, locked, and with no attempt to smash it open made by any guardians of “security”. It’s a very simple procedure to ascertain what’s in the case and any x-ray of the case reveals the instrument clearly inside — I’ve seen it myself several times. Why it was felt necessary to smash open the case like this in such a brutal and violent manner is beyond me. To stick a note in the case telling me that the TSA “sincerely regrets” having smashed the locks, but reminding me nevertheless that they are not liable for any damage (the last part was underlined in pen by the moron who smashed both case and instrument), is typical of the ‘take it or leave it’ attitude of the American security personnel at airports in the United States.

While I can appreciate the need for security at airports and God knows I’m glad of it, spending so much time as I do in airports, this over-the-top, using a sledgehammer to crack a nut attitude, is a typical hangover from the Bush regime who behaved like this in macrocosm in their dealings with the world, as well as the microcosm of their treatment of my bass. Travelling musicians know it’s getting more and more difficult to travel by air with your instruments these days. But it’s even more difficult in the US where apparently it’s not permitted to even give your instrument the protection of locking the case to prevent the instrument from falling out. To do so is to invite the thuggish attentions of some troglodyte servants of a faceless security regime which can pretty much do what it likes. The scrappy piece of paper thrown into my case was the sum total of responsibility that was deemed necessary by the TSA after they’ve smashed both bass and case. There was no number or contact details for me to make any protest of any kind. “Take it or leave it”. Land of the Free? Ha!
Posted by Ronan Guilfoyle at 10:31 PM