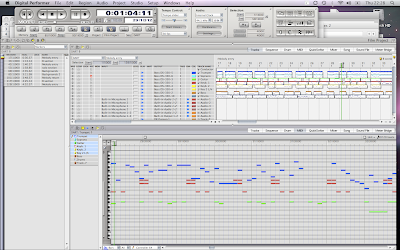 Well, to drop into horse racing parlance for a moment, I'm in the final furlong of my film music project – the film, Dun Laoghaire – Life in the Day, made by my good friend and colleague in several bands, Ellen Cranitch, is a representation of Dun Laoghaire, the town where I live, and have lived all my life. It’s been a really interesting process – I’ve written for film before, but always in the more traditional way, i.e the music was written, recorded and added to the soundtrack. In this instance we will be performing the music live, with the film.

This has brought up several interesting technical problems, not least how we would keep the each piece synced up with the film. A very common modus operandi for jazz musicians working with film in a live context is to have the musicians improvise with the film, taking their cues from the visual. This makes cueing etc. very simple. I’ve taken a different and more risk-laden route, by writing most of the material and having the solos emerge out of the written music. If we were recording this it wouldn’t be a problem – we’d just record to a click and everything would sync up – but we’re doing it live without a click, so it’s vital that a) we start off each piece at exactly the right tempo, and b) that we don’t rush or drag – a tall order! The film is in eleven short sections and is scored for trumpet, saxophones, two keyboards, guitar, bass and drums and is very challenging for the players. Fortunately I have the services of Métier at my disposal with the addition of Paul Williamson and Izumi Kimura, so if ever there was a band made to play this music it’s this one. We’ve also managed to obtain the services of the live sound wizard Paul Ashe Brown, so I’m confident that we’ll have a good night.

As long as the weather is kind to us – we’re performing outdoors, next Thursday (13th) in Meeting House Square at 10pm – the film will be projected onto the wall of the Gallery of Photography and we’ll be performing on the stage. If you’re in the area and fancy seeing and hearing something different please come down – admission is free and you don’t need to book, just come along - as they say in Dublin, you can’t say fairer than that!
Posted by Ronan Guilfoyle at 9:40 PM

Email ThisBlogThis!Share to TwitterShare to FacebookShare to Pinterest
Labels: Composition