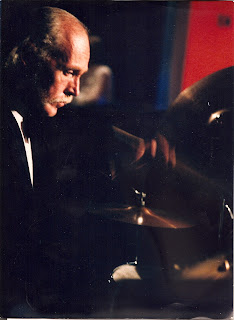 Tonight myself, and many of my Irish jazz colleagues, will be celebrating the life and work of the great drummer John Wadham, ('The Wad'), who passed away ten years ago. To any Irish readers of this piece, John will need no introduction or explanation. To others, I can say that John was one of those people who is indispensible to a small scene, bringing a level of expertise and ability that is of an international standard, and that sets the example for all those around them. He was the standard bearer for great swinging drumming in Ireland and was first call for every visiting jazz heavy-hitter who came from abroad, in the same way that European drummers such as Eric Ineke, Alex Riel, and Daniel Humair were (and are), in their respective countries. Like them, John was of an international standard and could sound good with anyone, and make them sound good. The list of people he played with was a measure of his standing both within the Irish jazz community and internationally – Zoot Sims, Maynard Ferguson, Barney Kessel, Art Farmer, Harold Land, Joe Newman etc etc

Apart from being a great drummer, John was also a really nice man – friendly, generous and VERY funny. He had a wicked sense of humour and could be very forthright in his opinions about players he felt were not up to scratch, (about which he was invariably right), and situations that were not ideal for playing. But he had absolutely no malice in him and he never had a hidden agenda, he was a straight talker, but careful not to be rude. However, towards the end of his life when his hearing was going, many very funny situations arose when John would bellow his opinion of some piece of incompetence on the part of a musician, in what he thought was a quiet undertone, but which in reality could be heard a couple of miles away! 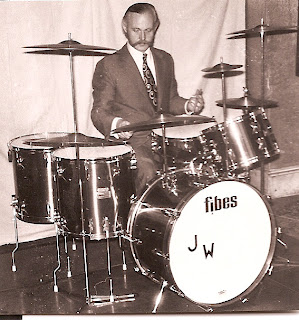 John was English, and had that English propensity for making remarks that were measured and matter of fact, but completely cutting. He remarked about an ex-student of his, who had gone on to worldwide fame with a major rock band, that the drummer in question was ‘by far my most famous student, and by far the least talented’.

John was also unflappable – I remember being in his car, driving on the motorway with him, at 70 miles an hour, when another driver did a lunatic overtaking maneuver, and cut right across us. We avoided a collision only by an incredibly adroit and fast reaction from John, (who was a very good driver), and we continued on – I was gasping with fright in the passenger seat, but John’s only reaction was to take the pipe out of his mouth, look at me sideways, and say laconically “I think we’re dealing with a fool here…..’

I first met John when I was brought to a jazz party by my father when I was fourteen, and I remember John being very friendly with me and laughing and joking with me as if we’d known each other for years. Over the years I saw him be like this with so many people – friendly and polite and approachable. And John was one of those people whom, once he knew you were really into the music, would go out of his way to help you discover great music of all kinds.

The first time I was invited to John’s house for one of his legendary ‘listening sessions’, I felt like I’d won the lottery! I stayed there with him till 4am, being played great record after great record, at deafening volume through the huge speakers John had in his living room. John was a record collector and had over a thousand LPs, lots of 78s, and reel to reel tapes and cassettes. In those pre-CD days when so much jazz was out of print, he was an incredible source for the young musician, with an evangelistic streak concerning the music. ‘You don’t know Andrew Hill!? Oh you’ve got to hear this!’ How many times were variations on that statement made to me in John’s house over the years, as he played me literally hundreds of records? 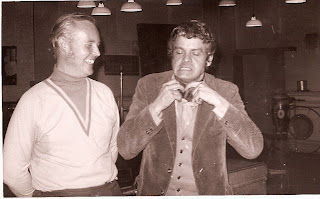 And not only would he play them for you, he would lend them to you to take home! He was extraordinarily generous in that way, and those nights in his lovely house, the coffee served in the china cups, laid out on the tray along with the biscuits, the smell of the pipe tobacco infusing the air, the music blasting out of the speakers, John’s running commentary on what was going on in the recording, these were among the most memorable moments I’ve had in music, and among the most influential, in the way it gave me an education in the jazz tradition and introduced me to so much great music and performers.

But of course the real education for an aspiring jazz bassist was to play with John. This was the Rolls Royce of jazz drumming in Ireland. Swinging, with impeccable time, listening intently to everything, and demonstrating a love and knowledge of the jazz tradition in every beat. I played with him first in 1979, and in retrospect I realize that I was nowhere near good enough to be playing with him, but he was complimentary and generous in his remarks, and when I overheard him tell another musician that ‘the young fellah has great time’, I think it was one of the proudest moments of my life.

A little later I was to join Tommy Halferty’s trio, with John on drums, and this was another hugely important experience for me. Tommy had (and has) a ferocious technique, as did John, and incredibly fast tempos were easy for them. So I was thrown in at the deep end and had to try and keep up with the maelstrom of ideas swirling around from both of them. The music was also very open, and John, though coming from a traditional background, was no conservative, and would try anything, from rock-oriented things to playing completely free. Playing with this band formed a huge part of my apprenticeship and I learned so much from playing with these two great and far more experienced musicians. 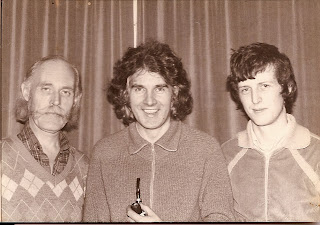 Here’s an example from the early 80’s, recorded in John’s living room in one of those impromptu recording sessions he like to organize. We play ‘It’s You Or No One’ at a fast tempo and John is just fantastic here. All the trademarks are in evidence, including the mischievous 2-bar disco drum fill he does on the in-head! And his accompaniment of my attempt at a bass solo is a model of how to accompany a bass solo – quiet, but intense and interactive.

This has been transferred from cassette, so the sound is lo-fi, but it’s a great example of John in full flow. I’ve left in the little bit of banter and the trademark laugh at the beginning, as a reminder for those who knew him.

The trio played regularly together for about four years, and apart from that, over the years, I played with John in so many situations and, like all musicians of that calibre, he was always consistent – swinging, professional, creative, supportive and with that amazing time that was so easy for a bassist to play with.

John was a confirmed bachelor, who lived in the lovely house in Dalkey that had been his parents’, and with his trademark moustache, pipe, interest in cricket and trains, he was every inch the Englishman, and he never lost that identity despite living in Ireland since the 1950s. As a result he remained a larger than life character around his neighbourhood, and in the music world, and was widely loved by a huge cross section of people, not only musicians. John liked routine in his life, and it was always endearing how when we would travel abroad, he would always immediately find a shop where he could get the Times and a place for a beer where he could do the crossword. He was one-off – a great jazz drummer and a unique man. In his Will he left his drums and all his music and records to Newpark Music Centre, the school where I and many of my colleagues teach -  a final act of generosity from a man who was generous all his life. Generous with his time, his enthusiasm, and most of all his music. Ten years after his death, (and I’m sure I’m not alone in this), I still miss him

Posted by Ronan Guilfoyle at 1:05 PM