Boston And Corfu - A Tale Of Two Jazz Schools

A couple of recent trips I’ve taken have shown the breadth of jazz education and how it can function in very different environments and on different scales, (no pun intended!).

In the middle of October I went to the Berklee InternationalNetwork 20th Anniversary meeting at the renowned Boston school. The BIN network is an international organization made up of schools from all around the world, all of whom collaborate with Berklee in a range of ways, from curriculum sharing to credit transfer. The school in which I work, Newpark Music Centre in Dublin, has been a member for almost 10 years, and like most of the schools in the organization, we operate on a tiny scale compared to Berklee. We have 120 full time students in our school, and Berklee has 4,400 – that gives you an idea of the disparities in the size of our respective organisations.

Berklee is a giant organisation, and one which is still growing, with a new campus opened two years ago in Valencia in Spain and a new building currently rising into the Boston skyline (pictured above on the left), as well as the numerous buildings they also occupy in that city. Its facilities are second to none, with state of the art studios and performance spaces, as well as the usual classrooms and practice facilities. Berklee's giant size and fame has generated hostility as well as admiration in jazz education circles, with a viewpoint sometimes being put forward that Berklee's size mitigates against a student there getting a true quality and artistic education there. This is both inaccurate and unfair. I never studied there, but I have been a guest teacher there, and of course at our school we have wide experience of dealing with Berklee on an ongoing basis, and the reality is that Berklee has teachers and courses that are every bit as good as the physical facilities they provide. I think it's true to say that in an institution the size of Berklee, it would be easy for a shy and retiring student to get lost, but that's probably true in any school. If you go to Berklee, and you have a good idea of what it is you want to do, you can get great teachers that will help you towards that goal, as well as the benefits of living in a large musical community with a huge amount of activity going on.

One thing Berklee has always been, is a weathervane for jazz education -  as far as the world of professional music making is concerned, it has generally got its finger on the pulse of the music industry and how it relates to musicians. So at this meeting of the various schools connected to Berklee, it was very interesting for me to see how many schools were diversifying away from traditional performance studies and into the worlds of music production, composing for Gaming, film scoring, and other non-performance related pursuits. Berklee themselves have been at the forefront of many of these developments and have also pioneered online learning. 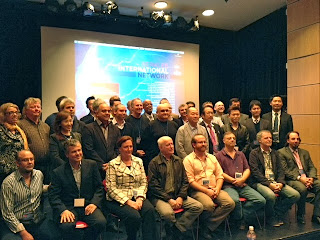 (Representatives of the BIN schools, including yours truly, gather for the family photo)

And listening to my colleagues around the world speaking and talking about their schools and courses, it struck me that as the environment for performing musicians gets more economically challenging by the day, we're already seeing a reaction from the schools in moving away from teaching performance, and towards these other more financially sustainable areas. I can see a situation where in maybe only twenty years time, high level music performance students will be in the minority in non-classical schools, and these other areas will make up the bulk of a typical schools' activities. Demand and supply. After all, who is going to spend four years, (minimum), and a lot of money on learning an instrument, and then play for the door in their professional life?

I do believe that the profession of high level performing musician is completely under threat, and could go the way of the Blacksmith in being a job that was once common, but now only done by specialists...

But this is a whole other conversation, back to the subject matter. So, having attended this meeting with colleagues from all over the world, at the world's biggest music school, a few days later I was off to teach for a few days at the Ionian University on the small and beautiful Greek island of Corfu, and it wouldn't be possible to think of a greater contrast between these two educational events. 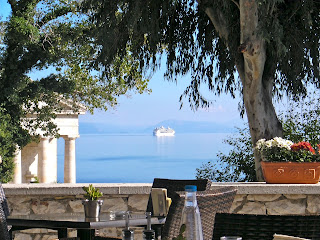 (The view from the cafeteria!)

Berklee is in Boston, one of America's largest cities, Corfu is small and extraordinarily picturesque. It is an island very popular with holiday makers, but in October, most of the tourists have gone and you get this end of season feeling from the half empty restaurants and shops - a bittersweet atmosphere that I remembered so well from my last visit there, which had also taken place at this time of the year. I've loved Greece from the first time I went there, and I've loved it more ever since, for so many reasons.

So when an opportunity arose to to go there and teach again, along with the great Dutch drummer Eric Ineke, I jumped at it, and a few days after returning from the hurly-burly of Berklee and downtown Boston,  found myself in the quietness and Mediterranean beauty of Corfu. And from being in an institution that had more than four thousand students, I found myself working with a student body of less than fifty.

I also found myself going from one of the world's richest countries, to one which has been buffeted by economic travails in recent years - a buffeting I know all too well since Ireland has also gone through similar economic ill fortune, and our people have also been immorally impoverished in order to keep rich people rich. Greece is having an even harder time than Ireland and has suffered the economic strictures of the IMF and EU in an even more brutal way than we have. So, apart from any other reason, I was very happy to go to Greece and talk to, and work with the students there, and to be able to remind them, and me, about what is really important and of true value to us all in these horrible days - music. 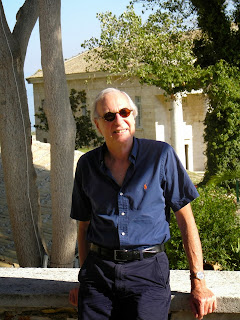 So having ensconced myself in my small hotel, I met Eric for dinner and as always with this great and experienced musician, the talk turned to music in general and jazz in particular and we had a particularly stimulating discussion about the evolution of the rhythm section as a unit in jazz, and who were the greatest exponents of the art of accompaniment. It's always a pleasure being with Eric and his knowledge and experience is in evidence whether you're talking with him or having the immense pleasure of playing with him. Eric has had an amazing career and soon I'll be publishing an interview with him here on this blog in which he talks about his life and career in music. Watch this space.

For several days Eric and I worked together with the students, covering as many different areas as we could in the short time we had - how to make your music feel good, rhythm section playing, a great overview of Elvin Jones' career and music given by Eric, how to improve your rhythmic technique, ensemble playing, and individual bass and drum lessons. 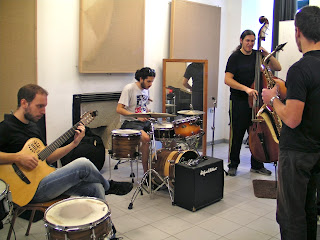 It was a pleasure to work with the students, who were both talented and enthusiastic and the whole programme is a credit to the course leader Dimos Dimitriadis, who has fought heroically to keep jazz education going in 3rd Level education in Greece at a time of great economic difficulty. The musical highlight of the week for me was the gig Dimos, Eric and my old friend the great pianist George Kontrafouris, did when we played at a local arts club to a packed house, and just had so much fun swinging as hard as we could and playing for such a great audience.

Corfu itself is beautiful and my daily commute to work - a twenty minute walk along the seafront to the school - was a highlight in itself. To get an idea of the beauty and character of Corfu that I experienced while there, have a look here.

At the end of my time I was genuinely sorry to leave this beautiful island, these committed musicians and the wonderful people that I met there in everyday life. But this very intense two weeks of travelling between, and working within two very different jazz education institutions showed again the adaptability of the jazz education model, and how it can flourish in two very different environments, and on two very different scales. In both places I met people who love music, who care about it and want it to succeed and who put their talents and energies towards that end.

There are a lot of naysayers about jazz education, but the most charitable thing I can say about them is that they don't understand anything about jazz education and how it works. To see what I saw in two weeks, is to see something inspiring and hopeful, and indeed touching. Despite all the crap, music lives, creativity lives, jazz lives.

Posted by Ronan Guilfoyle at 4:34 PM

Email ThisBlogThis!Share to TwitterShare to FacebookShare to Pinterest
Labels: education