This is pretty amazing to watch.

When the metronomes cannot connect to each other, they get out of synch. As soon as they can connect, or 'hear' each other they get in synch pretty much immediately. It's like a lesson in microcosm showing how musicians will always play together if they listen to each other, but can't if they're in their own world. I've noticed this phenomena sometimes when working with classical musicians. They'll be great players and can read anything, but when playing a piece together they sometimes just read their own part and don't try to hear where they are in relation to the ground pulse and in relation to where everybody else is. As a result they get out of sync pretty easily. Not all the time of course, but it's a phenomenon I've noticed before - reading the part in isolation and not relating it to everyone else's part. In symphony orchestras of course this is endemic - but that's a whole other story!

Posted by Ronan Guilfoyle at 8:32 AM 3 comments:

Email ThisBlogThis!Share to TwitterShare to FacebookShare to Pinterest
Labels: Rhythm 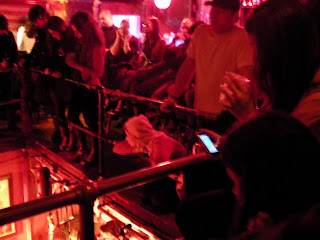 I don't have a mobile phone

This is the answer given to numerous people who ask me for my cell phone number, and it has been greeted with varying levels of disbelief, particularly in recent years. When I set my face against getting a mobile phone years ago, people would greet the news that I didn't have one with, at first, vague admiration, which then changed to a feeling that I was vaguely eccentric (especially as time passed and more people organised their lives around mobile phones), and finally ended up with people thinking I was barking mad.

My original objection to mobile phones was that I didn't want to be reached simply anywhere, that I didn't need the extra stress of being available at all hours of the day or night no matter where I was. But another reason for not getting a mobile phone became apparent to me a few years later after my original decision not to get one - the distancing effect of these devices.

This was brought home to me on a trip to Cairo in 2004, when I was there to do research in order to write a piece of music. On one occasion I was travelling round old Cairo with an Italian film crew, and we ended up in an old coffee house in an alleyway, with the sun setting and the moon rising above a minaret on the other side of the alley - a completely “Arabian Nights” scene. And I looked around to see if everyone else was getting this incredible vibe from where we were, only to find that all seven of my companions were on seven different mobile phones having seven different conversations, and being completely oblivious to where they were.

This kind of copper-fastened my intense dislike of these machines. And don't get me wrong, I'm not a technophobe. In fact I’m very computer literate, and internet literate, I have an iPod touch, a laptop, an iMac, I write music on my computer, I’m king of the e-mails, and write this blog. I'm very aware of what technology can do for us, and for me. I use Facebook and YouTube etc etc and I realise these are just part and parcel of being a professional musician these days.

But I've managed to hold out against the mobile phone. For the reasons mentioned above. Of course it's probably a pain in the ass for people to deal with me, since everybody is so used to being able to reach anybody at any time. And doubtless there are those who consider me to be a crank. And maybe I am. But I don't give a shit! I'm definitely happier without a mobile phone than I would be with one. I love the fact that when I leave the house nobody can reach me, that when I go for a walk nobody can call me or bother me with stuff that can, 99 times out of 100, wait. I love the fact that when I am out I never feel the need to “check my messages”, in that obsessive way that the vast majority of mobile phone users have. I never taken out a mobile phone at a restaurant and rudely put it on the table, the way so many people do. And I love the fact that I am 100% IN the environment that I find myself in at any time.

Because it is this partial removal from any situation that the mobile phone user submits to, that bothers me the most about this particular technology. These people are having a conversation with you and giving you their full attention only for as long as the phone stays silent or doesn't vibrate in their pocket or otherwise tell them that they need to disengage from whatever it is they’re doing and see who's trying to call. It's this tyranny of the phone that I really object to. 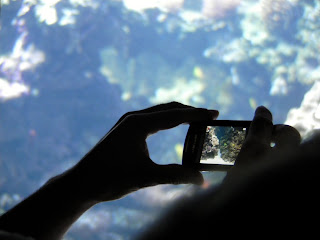 And this distancing effect is not confined to phone use either. I was in Valencia last week and I went to the amazing aquarium that they have there. It was a holiday that day and very packed, but I noticed that the vast majority of the people who were there spent most of the time photographing the fish and the tanks, and not looking at them at all. They were photographing and not seeing. Everything was about “the shot” - in previous times people would have gone through the aquarium gazing around them at the exhibits, talking to each other pointing out this and that. Here, they were walking from tank to tank, getting the shot, then moving onto the next one. They were there, but they were not there. More distancing.

Last night I played opposite Kurt Rosenwinkel at a festival here in Ireland, during Kurt’s set I went into the auditorium to check it out. And sitting in the audience, every few minutes, I would see someone take the phone out of the pocket or out of the bag turn it on, look at it, and put it back from where it came. Obsessively checking their messages - for what!? Almost certainly nothing important. How can you be at a concert, and not even be able to give your attention to the music that is being played right in front of you? A concert for which you have bought a ticket and paid good money to go and see. As always, the mobile phone has primacy. The users have become so addicted to “being connected” that they cannot even devote 45 minutes without meaninglessly checking their phones. More distancing. 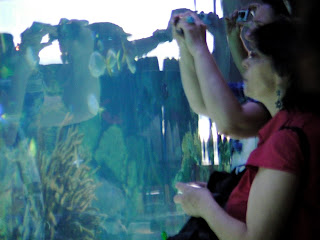 With the development of this kind of technology we are more and more being removed from where we are, to the point where we cannot commit to being 100% involved in almost anything. Even the most fundamental things. I saw a family in a restaurant a couple of weeks ago - father, mother, two kids - the youngest of which, (a child of about 6), had been given his fathers iPad to play with at the table. So there they were, having a family meal with their six-year-old playing games on the iPad and wearing headphones. I looked at that and I thought, this is ultimately where it's going. A situation where four or five people, even family members, sit together but they pay absolutely no attention to each other, because they're all somewhere else.

This technology has all kinds of ramifications for musicians, not least the fostering of attention deficit in both listeners and musicians - especially young musicians who are growing up with this technology as part of their daily lives (this is a big subject on its own........). Can a young musician trying to learn to play jazz for example, resist the temptation to check his or her phone or computer while they're practising? It's a hard question to answer. All I can say is that if I'd had an iPhone, or a PowerBook connected to the World Wide Web in the corner of my practice room when I was 19, I definitely would have done a lot less practice than I did...............

Of course the genie is out of the bottle, there is no way of getting it back in, but that doesn't mean that we have to surrender to to it in every way - which is what most people seem to do. Of course I have no idea where this mobile phone technology and etiquette (or lack of it), is going to go, but for as long as possible, I’m going to keep going in the opposite direction.
Posted by Ronan Guilfoyle at 11:36 PM 7 comments: