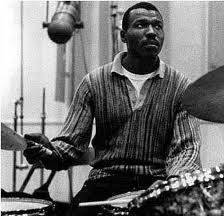 If you ever want a masterclass in true rhythmic polyrhythmic complexity allied to one of the best ever swing grooves, have a listen to Elvin's playing on 'Transition' - if you have a proper stereo system, as opposed to an iPod player, use the stereo balance to just listen to Elvin - the separation is so extreme you can hear everything Elvin is playing, it's like standing beside him. Then listen to the whole track again with the full band, and hear the full context of what Elvin is playing and how he's responding to, and playing with Trane, McCoy and Garrison. Then lie down with a cold towel on your forehead....

Posted by Ronan Guilfoyle at 9:16 PM No comments: 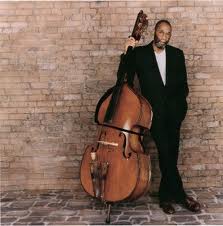 Ron Carter turned 75 recently. It's amazing that, in a music with an incredibly high mortality rate, (especially among Carter's generation), that he's still around and that he's still active and playing. Like Wayne Shorter and Herbie Hancock, his bandmates in the legendary Miles Quintet of the 60s, he seems ageless - it seems impossible that there will come a time when he, (and they), will not be around. Carter has been on the scene since the very late 50s, and is apparently the most recorded bassist in history. He's certainly someone I've been aware of since I first started listening to and being aware of jazz in the early 70s, and as a bassist, he has had a profound influence on me.

Carter is for my money, the greatest walking bassist in the history of jazz. Big words, I know - and describing somebody in music as being 'the best' is a risky proposition, since it is ultimately unprovable,  and probably undesirable as well - music is after all, not a competitive sport. Maybe it would be more appropriate for me to say that as a walking bassist, nobody satisfies me on so many levels as Carter. Others have had an extraordinarily powerful beat (Ray Brown, Leroy Vinnegar), and some have a relentlessly creative mind when it comes to note-choices for bass lines (Scott LaFaro, Eddie Gomez), but none of combined these two elements in the way that Carter has.

Carter's ability to dictate the direction of the band through both rhythmic and harmonic means is unparalleled by any other bassist. Harmonically he seems to have a lexicon of possibilities to apply to even the most mundane tunes, and pieces that he must have played thousands of times. To hear Ron Carter play a blues is to hear the apogee of endless variation of a simple harmonic form. If you are an aspiring bassist and you want to learn how to play great walking bass lines on a blues or Rhythm Changes, just take virtually any RC recording and transcribe what he plays - everything you need is there.

Carter's bass lines come into the 'why didn't I think of that!?' category. They're not that complex in themselves, but they're so relentlessly creative - always shifting, always finding the perfect note, always outlining the harmony but in a way that follows an inexorable voice-leading logic. Carter bass lines are like voice-leading études - as perfect in this regard as any line from a Baroque composer. And they're always logical - hence the 'why didn't I think of that?' feeling you get as a bassist when you listen to Carter's lines. Of course the reason that you didn't think of that is because you (and by you I mean me!) are not as good as Ron Carter at this stuff! In fact in my opinion, nobody is as good as him at this voice-leading aspect of the music. Carter practices Bach a lot and you can hear this kind of contrapuntal intelligence in his lines.

And then there is the rhythmic creativity - Carter has the ability to fundamentally change the perception of the listener with just a slight shifting of where he is in the bar, or even in the beat. He will take a phrase and shift it backwards or forwards by a tiny amount, and the whole landscape changes. You can be suddenly taken outside your comfort zone by one one of these little rhythmic tweaks and kept out there until such time as he decides to, (almost always majestically, and at the perfect moment), resolve it and bring everyone home safely. He is a master of this, and I think his contribution to the Miles Quintet is extremely underrated. Yes Herbie, Tony and Wayne were amazing - but this band couldn't have achieved what they did with any other bassist. 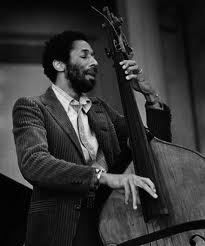 His time feel is a wonder in itself, slightly to the front of the beat but rock solid, with an inner-sprung bounciness that's different to other great walking bassists. It has a more pliable feel than for example Ray Brown's big-as-an-oak-tree quarter note, and is more unpredictable rhythmically than either Brown's or Paul Chambers. He has his own lexicon of crafty embellishments  - triplets, pull-offs to the the open strings, leaps to the open string harmonics - which he varies endlessly and beautifully.

Here's a classic example - the amazing walking bass on Invitation from Joe Henderson's great 'Tetragon' album. Everything that's great about Carter's bass playing is on display here - if you want to know how to play so much C minor and yet never repeat yourself, then you need to check this out. The bass is a little over-recorded and the sound a little too early Barcus-Berry pick up (for my taste anyway), but the way Carter bosses this track is just extraordinary. And he and DeJohnette sound so good together.......

I studied this recording so much and blatantly copped a lot of Carter's methods of getting around cycle of 5ths progressions and ways of making extended minor key passages interesting.

Carter is of course best known for his time with Miles and playing with Tony Williams, but there's so much other good stuff out there. I particularly like his playing with drummers who have a broader cymbal beat than Tony had - particularly when he played with Elvin on such celebrated albums as 'Speak No Evil',  'The Real McCoy' and 'Trident'. I've heard anecdotally that Elvin and Ron didn't get on well on a personal level, which may explain why their recordings together are not extensive (I can't think of any live albums of them together - maybe someone can put me straight?), but any time they played together the feel is just great - Elvin's turbulent yet laid back forward motion works so well with Ron's springy certainty.

Another drummer that Carter sounds great with is Mel Lewis - Lewis also had a broad cymbal beat which  dovetailed beautifully with Carter's time feel. They recorded together a few times and one of my favorites is on Thad Jones and Pepper Adams' little-known gem of an album 'Mean What You Say'. Duke Pearson played piano on this recording which features some fantastic arranging from Jones, (a masterclass in small group arranging) and gives Carter lots of space to show the full range of his skills. Like here on 'H and T Blues' -

Again, Carter's creativity on the blues - a form he must have played literally thousands of times - is wonder to behold.

I must admit I've never been crazy about Carter as a soloist, though it is individualistic. Having said that, Carter did record one of my all-time favorite bass solos with the Great Jazz Trio, (Hank Jones, Carter, Williams) live at the Village Vanguard, where on 'Naima' Carter plays an extraordinary solo which is almost solely based on rhythm. By rhythmically manipulating the two pedal tones, he creates a riveting solo which should be mandatory study for all jazz bassists on how to make the most out of simple material by using rhythmic means alone. But in general, I've never felt that his soloing is on a level with his accompaniment and I've also never liked his own two-bass bands. But these are small personal cavils - nobody can be great at everything, and I do think he's a very interesting composer, writing little contrapuntal gems which are very individualistic. I particularly love a little-known album called 'Etudes' (with Tony Williams, Bill Evans and Art Farmer), that features some wonderful compositions - gems like 'Arboretum' and 'Rufus' which really should be better known. Carter actually has quite a distinguished history as a composer on classic recordings, such as 'RJ' with Miles and 'First Trip' from Herbie's classic 'Speak Like a Child' album.

But it will be mainly as an accompanist that Carter will be known - and rightly so, since this is ultimately the role of the bass, no matter how much chops and harmonic information we may have acquired over the decades. If we're talking about accompaniment and the role of the bass in jazz, as far as I'm concerned, there's Ron Carter and then there's everyone else.........

Happy 75th Mr. Carter and thank you for the great music and inspiration

Postscript: Having said that Carter and Elvin never recorded live together, I found a clip of them playing together on Youtube. It's an All-Star conglomeration recorded at the Hollywood Bowl in 1982, and despite some cretinous editing, (and footage of people who indisputably prove that man is definitely not evolution's last word), there's some pretty burning music here