Amateur Hour - will the profession of musician go the way of the Blacksmith?

We live, in the arts at least, in the age of the amateur. Technological advances coupled with the ease of internet access, have flooded society with the work of amateur photographers, film makers and musicians.Nothing wrong with that in itself, people have always had fun with the arts as a hobby and hopefully they always will. Being involved in something artistic is so good for anybody. The problem these days is that the flood of material and the sophistication of the technology has blurred the lines between people who dabble and use software to help them look like they know what they're doing, and the people who actually know what they're doing. The torrent of Instagram/Photoshop/Garageband/Youtube type content online is testament to the fact that many people have a sense that they are professional standard artists, when to the professional eye, or ear, they clearly are not. The technology can make you look good for a minute, but as to producing anything high level over an extended period time? I don't think so.


Again, there's nothing wrong with people having a sense of hubris about their Facebook photos - in itself that kind of thing is a harmless human peccadillo. The problem these days is that the professional is being edged out by the flood of amateur content. The hubris has reached the point where the general public either can't tell the difference between high quality work and dabbling, or doesn't care. Professionals are finding it harder and harder to get paid for their work, and to be able to make a living at the arts discipline to which they've devoted years of their lives, and an incredible amount of work. Couple this lack of public discernment between high level work and amateur dabbling, with the reluctance of the public these days to pay for arts content, (especially music), and you have a perfect storm for the professional artist. 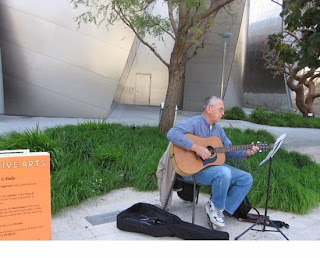 I've been thinking about these things for a while, but this post was brought on by a brief conversation I had recently with a part time musician at a performance by an incredibly highly skilled professional group. He said to me 'how can those guys play like that?' and went on to talk about them as if the reason for the gulf in class between him and them was because they were some kind of super-beings. I didn't get into it, because I didn't want to appear rude, and I was too tired at the end of the night, but my immediate mental response was that one very good reason why they could play so much better than he could was because they've devoted their lives to music, and he hadn't. Leaving aside the creative aspects, what we'd seen on the stage was at least partly the result of years of PRACTICE!

There are certain musical things that can't even be approached unless you've devoted years of time and effort and thought to it, yet in this age of the amateur this aspect of being a high-level artist is becoming forgotten, or is not considered necessary. 'Why should I practice for years when I can use an app?', seems to be the kind of attitude displayed by many. My amateur musician friend thinks nothing of opening for true professional acts, and doesn't seem to see any reason why he shouldn't be up there with people who actually know what they're doing. He seems to think the only reason why he can't do what they can is due to some genetic disparity, and has nothing to do with the fact that he hasn't put in one hundredth of the amount of the work that the pros have.
Which is typical of the disrespect for craft that is so prevalent today

And is something which poses such a threat to the high-level artist. True professionals are competing with amateurs as never before, and trying to make themselves heard above the din of substandard content that floods the internet every day. Combine this with the death of mainstream media,  and the old way of publicising yourself, and the higher valuation given to the method of delivery of content (iPods, Kindle, Ipads etc), over the actual content itself (music, photographs, video etc), and an unwillingness to pay for good content, and you have a situation where the profession of high-level musician is under threat as a viable way to make a living.

It seems to me that unless something changes, the inevitable endgame of all this will be the disappearance of the high-level professional musician. Yes there will always be people playing music and writing music, but will they be any good? Probably not, since they won't have devoted any time to it, and why would anyone devote years of study and financial resources to something that nobody will pay you for? Will the profession of musician end up like that of the Blacksmith - once one of the most common trades in the world and now one of the rarest, maintained by a few very highly paid specialists? I can foresee a situation where there are just a few very highly trained jazz musicians, whom, if you want to hire them, will charge you a LOT of money. Listening to live jazz (or any music that takes a lot of skill and dedication to play), could become like eating in a Michelin-starred restaurant - something very expensive, only available to the well-heeled connoisseur. The rest will have to listen to the McDonald's of the music world  - low class dross, mass produced by amateurs costing little or nothing to produce or buy.

I hope I'm proved wrong, but at the moment it's only going one way - Amateur Hour is here, and looks like it's here to stay.

Posted by Ronan Guilfoyle at 7:01 PM