Bill Evans and the Juxtaposition of 3/4 and 4/4 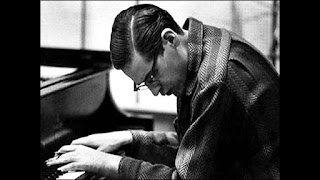 (N.B. In choosing the Youtube versions of the pieces under discussion, I was careful to only use them if they were already available for free on Spotify, or were just video performances. You should of course buy them in higher quality formats and hear them properly instead of the crappy Mp3 stuff found online)

Bill Evans is recognised and lauded for his use of harmonic colour and sense of lyricism, and it’s probably fair to say that these are the musical qualities he is most often associated with when his playing is discussed and analysed. What is less often discussed is Evans’ interest in unusual, (at least in jazz), structural devices in both his compositions and arrangements of standard tunes. He used harmony in very individual ways such as in his composition ‘Twelve Tone Tune’, where he uses Schoenberg’s serialism technique to create a jazz piece, (a twelve tone tune which is twelve bars long), and in ‘Comrade Conrad’, where the harmonic scheme works its way through all twelve keys during the course of each solo.

He also used rhythm as a structural device, and as early as 1956, on the album New Jazz Conceptions he recorded his composition 'Five' which used quintuplets as the building blocks of a rhythm changes tune.

Using quintuplets was a very unusual device in jazz at that time, (I don’t know of any other examples of it from this period), and they create a feeling of dragged quarter note triplets, which is intriguing to the listener, and shows that, even at this early stage of his career, Evans was aware of the possibilities of rhythm in creating unusual spatial effects in the music.

One rhythmic device that Evans would return to again and again throughout his career, was the juxtaposition of time signatures of 3/4 and 4/4. This interest in the juxtaposition of the two meters can be seen as early as 1961 on 'Waltz For Debby', in which the melody takes the form of a stately waltz, but the meter changes to 4/4 when the improvising begins and remains there, with even the out-head being played in 4/4.

However, it is in his arrangement of the standard ‘Someday My Prince Will Come’ that Evans most fully explores how the effect of adding or removing a beat, as the meters change, affects the harmonic rhythm and the melodic line.

Someday My Prince Will Come is one of the most famous 20th Century waltz tunes, made popular in jazz by Miles Davis on the release of the album of the same name in 1961. However Evans’ released a version of the tune a year earlier on ‘Portrait in Jazz’, and in this version, and in many subsequent live versions, Evans treats it as a straight waltz, played quite conventionally. It is in the release of ‘Bill Evans At The Montreux Jazz Festival’ (Verve, V6-8762), from 1968, that we hear a very different treatment of the tune.

In this recording with the trio of Evans, Eddie Gomez on bass, and Jack DeJohnette on drums, Evans plays the melody in the standard 3/4, but then changes the meter to 4/4 for the first chorus of his improvisation, reverting back to 3/4 in the next chorus, and alternating between the two meters thereafter, including during the bass solo and the drum breaks with DeJohnette. When they return to the ABAC melody after the solos, they play the A and B sections in 4/4, and the second A and C section in 3/4.

It may seem like a truism to state that the big difference between 3/4  and 4/4 is one beat, but this beat, (added on in 4/4 if moving from 3/4, and removed if moving to 3/4 from 4/4), has a very powerful impact on the structure and ultimately the feeling of a piece. This can be clearly heard, and felt, in this arrangement by Evans. After hearing a chorus of the tune played in the traditional 3/4,  the subsequent 4/4 meter feels very spacious. That extra beat gives the music more time to breathe and the harmonic rhythm changes from chorus to chorus. Evans’ response to that extra space can be clearly heard in the second chorus of his solo in the 4/4 meter (at 1.39),  where, having played a sprightly 3/4 improvisation in the previous chorus, he unleashes a rapid cascade of notes for the whole 4/4 chorus, playing across the time, and leaving it to the bass and drums to state the pulse.

Interestingly, in a TV recording from Sweden in 1970, with his trio of Gomez and Marty Morrel on drums, he plays the tune using the same arrangement and again, in the second chorus of 4/4 (at 1.29), he plays the same kind of unmetered flurry of notes for the whole chorus. While it’s clear from this that Evans responded differently to the alternately expanding and contracting meter, it’s interesting to speculate whether these rapid passages in the second 4/4 chorus represent Evans spontaneously responding to the wider spaces of the 4/4 meter, or whether it became something that Evans always did at that spot in the tune. There are no other recordings I can find of this arrangement, and in his next, and last, trio with Marc Johnson and Joe Labarbera he reverted to playing the tune as a straight waltz again.

Evans’ use of alternating meters while keeping the same harmonic scheme has great potential for further examination as a tool for improvisation. It is little explored, and it appears that Evans himself, while playing several pieces that alternated meters, only used that particular technique for two or three years of his career.

An interesting footnote to the Montreux performance: an Irish group also played at the Montreux Festival in 1968, and the drummer from that group, John Wadham, was at the rehearsal of Evans’ trio which took place on the day of the concert recording. I knew John well, and he told me that although this was DeJohnette’s first concert with the trio, Evans produced no written music and the entire rehearsal was conducted solely using verbal instructions regarding arrangements, beginnings and endings. It's fascinating to realise that Evans, a man given to using many preconceived structures in his compositions, nonetheless preferred to demonstrate the music verbally in rehearsal.
Posted by Ronan Guilfoyle at 12:41 PM