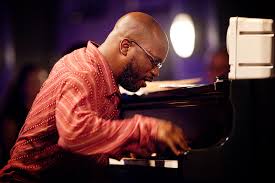 How could I have missed out on the music of Orrin Evans for so long!? Yes I was aware of his name, I knew he was a member of Tarbaby along with Eric Revis and Nasheet Waits, both of whom I'm very familiar with. I also knew he was the leader of the highly regarded Captain Black Big Band, but somehow, I'd never checked him out. And I think it's true to say that on this side of the Atlantic he's not so well known  - certainly in comparison to some other pianists. But having listened intently for the first time last night, I've come to realise that this guy is a major contemporary jazz pianist and I can't believe I've missed out on his music for so long.

But the one good thing on missing out on something good, is that you get the pleasure of real discovery, and this is what happened last night when, on an iTunes browse, I came across his trio recording 'Flip the Script' - and what a recording it is...... 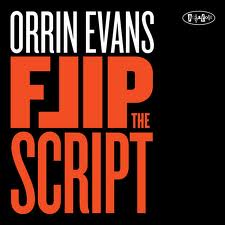 Evans plays with Ben Wolfe on bass and Donald Edwards on drums, in a programme of mostly his own compositions, and it's a powerful and creative piece of work, full of things to admire. In a time when so much contemporary jazz features medium tempo, straight 8s, vaguely melancholy pieces, the sheer variety of this trio recording is very refreshing. Both ends of the tempo spectrum are explored extensively, and it's so bracing to hear both very fast tempos and very slow tempos being played fearlessly, and with such panache. One of the reasons that musicians don't play these tempos so much is because they're both really hard to do! Evans' trio eat up the challenge of this and pretty much everything else. Evans creates very interesting compositions, all of which have some wrinkle or other that differentiates them from the run of the mill jazz ditties that are so often churned out in this idiom. And they really swing - burning jazz piano trio playing of the first rank.

There's one other little kink in this recording that i really enjoy, and that is, strangely enough, that the piano is not the best instrument I've ever heard. It's definitely suffering in some places, but somehow that works for the recording, giving it a kinship with earlier piano recordings where it was not always possible to get a perfect instrument for your recording  - try McCoy's 'Ebony Queen' as an example of what I'm talking about. Not that the Evans recording's piano is as jangly as that on the McCoy recording, and I'm sure most pianists would always want the best piano they can get, but somehow that edginess to the piano adds to the cutting edge of the music - especially on the uptempo pieces. At least to me!

Having listened to this recording it's a mystery to me how I could have missed out on Evans for so long - after all he's very highly regarded in the US and is Grammy nominated, placed second in the Monk competition etc. - but somehow his star is lower here than it should be. Hopefully that will be rectified soon -  I know my lack of knowledge of his work is going to be rectified immediately!

Here he is talking about 'Flip the Script' - if you haven't checked Orrin Evans out already and you love great jazz piano playing, then do yourself a favour and have a listen

Posted by Ronan Guilfoyle at 9:50 AM