Swinging with John and Joey 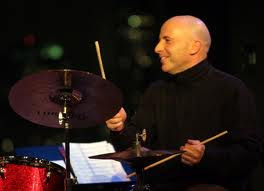 I was tidying my attic music room (just a little, it’s still a shambles) and I came across this video that I’d completely forgotten that I had. It’s from a tour I did in Ireland in 2008 with Michael Buckley, John Abercrombie and Joey Baron. I remember I stuck up a camera behind the sound desk at the Belfast gig and let it run. It’s always interesting to listen to music that you were involved with but can’t remember the details of, and this was the case for me with this clip. I haven’t checked out the rest of the recording, but I’m definitely going to – this tune feels so good!

This was a trio piece – a lovely tune of John’s called ‘Jazz Folk’, and it swings along really nicely. One thing I do remember about this is that we played it in the second set – we had to cut the first set short because one of the guitar amps had malfunctioned, and I remember John being really annoyed about it. Years of using what he describes as ‘amp du jour’ has made him weary of getting either the wrong kind of amps or getting ones, like this one, that didn’t work properly. So during the intermission he was quite pissed off and when we took to the stage for the second set the vibe definitely was a bit on the wrong side of enthusiastic.... But Joey kind of took over and just vibed us back into good spirits, both in the way he played and with audible shouts of encouragement – it was really something to see the way his infectious joy at playing music just steamrollered over the difficulties we’d had and the bad vibes that had resulted. He dragged us along by the scruff of the neck and soon everyone was smiling again. You can clearly see Joey’s amazing spirit in the video.

And check out Joey’s incredible swing feel too – the brush playing, the power of his quarter note. Joey is well known for his playing at the cutting edge of contemporary jazz (Masada, Tongue in Grove, Dave Douglas etc.) but I think a lot of young drummers could learn a lot from looking at this and seeing how great he is at playing in the swing tradition over song form. It’s an object lesson in being aware of where this music comes from and being able to really deal with the skills involved in swing playing over structure. Also this is a masterclass in how a drummer can orchestrate a ‘slow burn’ - the way Joey almost imperceptibly turns up the gas over several choruses is a classic example of this concept.

And of course John is his unique self – lyrical, individual, non-clichéd – every phrase flowing from the last with wonderful musical logic and improvisational virtuosity. And ‘Jazz Folk’ is yet another in the long list of lyrical songs (‘Labor Day’, ‘Even Steven’ etc) that John has written – lovely miniatures that stick in your musical memory hours after the music has finished.

I must have a look and see what else I can dig up from this gig – looks like it was a good one! You can see more from the tour – Here and Here

Posted by Ronan Guilfoyle at 1:58 PM