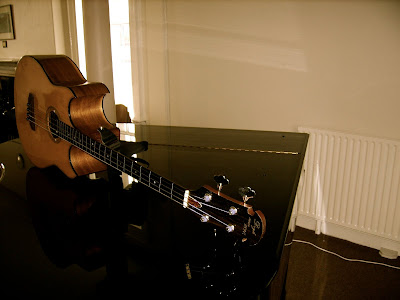 I got my first Acoustic Bass Guitar in 1983. From the beginning of buying my first bass – an Ibanez electric which cost me £49 – I was listening pretty much exclusively to jazz which of course was pretty much exclusively played on upright bass. And I’d have loved to have played an upright bass – virtually everyone I was listening to was an upright player – but I couldn’t afford a good one. I got an opportunity to play an upright bass when a friend of mine loaned me one, but it wasn’t a good instrument, was physically difficult to play, and I hated the feel and sound of it. So going on the basis that I’d rather have a decent electric sound than a crap acoustic one, I persevered with the electric and just tried to make it as acoustic sounding as possible – flatwound strings, fretless, using the left hand (the plucking hand – I’m left handed) close to the end of the fretboard in order to get a softer sound, using the side rather than the tip of my finger to get a fatter sound etc. All my efforts were directed towards making the electric instrument sound more acoustic.

Then a student of mine arrived at the house one day with an Acoustic Bass Guitar – must have been one of the first ones manufactured around that time – an EKO, an Italian factory built instrument – not a very good one but it was a revelation to me. It had the acoustic property I’d been looking for, but had the physical characteristics of the bass guitar – I’d seen the future, and it worked! I had a bit of work done on it to customise it for me, and from then on I gave up the electric bass and focussed exclusively on the ABG. 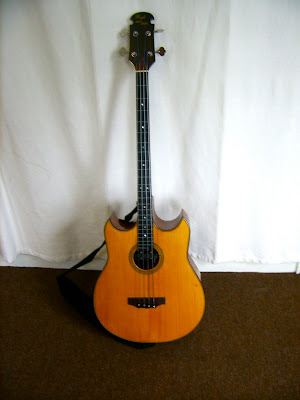 And have been doing so ever since. I’ve been exclusively playing ABG for the past 26 years with a few returns to the electric bass for gigs of Brazilian music, or occasional other situations where the electric is more suitable. But in general it’s been the ABG all the way since then, and I really love it. I love the fact that it blends well with other acoustic instruments, I love the way it can sound so good in the traditional role of the bass in jazz. I love the way you can manipulate the sound with your fingers rather than through electronics, and I even love the fact that you have to fight a bit harder to get the sound from the instrument than you do on an electric – there’s something about that little bit of extra work you have to do that is more satisfying than the instant touch response of the electric, on the ABG I feel more connected to the resultant sound than I do on the electric. I got a custom-built instrument in 1993, with a deeper body and longer scale neck, and a double cutaway, and I’m still using this instrument – as the wood has matured and settled the sound has got better and better.

One thing that’s always surprised me about the ABG is how few jazz players have taken to it. There are many electric players playing jazz these days but the instrument is problematic when playing with acoustic instruments, and especially in a more traditional jazz setting. The electric’s sonority is very prominent and it tends to stick its nose out of the ensemble too much and rudely draw attention to itself. The upright bass lends itself better to blending into the ensemble while proving the essential bottom to the music in an unobtrusive way. The ABG has this quality too and although it has a smaller sound than the upright, it has a similar sonority and tonal character. So it's ideal for acoustic jazz, and is an ideal vehicle for bass guitar players in that idiom, but it has never taken off for some reason. Apart from myself, the only other person I’m aware of playing the ABG exclusively is Jerome Harris – and even he plays regular guitar from time to time. The great Steve Swallow, who of course pioneered the electric bass in jazz, has also recently taken to playing an ABG of his own design , but that seems to be pretty much it for ABG players in jazz – I’m sure there are more I’m not aware of, but there’s no doubt that it’s still a rarity in jazz. Which is a pity because it’s a great instrument, with lots of potential for expressive and diverse playing. 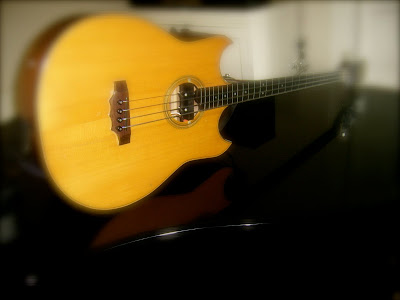 Over the years I’ve made several solo recordings of the ABG, though I’ve never released any of them, (strangely enough the jazz record companies have not been beating a path to my door or squabbling among themselves for the privilege of releasing an album of solo ABG improvisations..........). I love making these recordings as I can utilise the natural sound of the instrument without pickups (essential for playing with a band, since the ABG’s sound is not loud enough to compete with drums or piano for example), and feature its full sonority. I recently recorded a few pieces and put them up on Youtube – I wanted to capture various aspects of the instrument in an improvised setting. So I recorded some different types of pieces – such as Coltrane’s ‘Giant Steps’ in 7, (below), a piece featuring walking bass, an exploration of the sonic possibilities of the instrument, a piece based on traditional bebop bass soloing techniques, a classic ballad standard, and Ornette’s classic ’Round Trip’


I met the legendary Muhal Richard Abrams over twenty years ago and he did a double-take on seeing the instrument and immediately said ‘Wow man, with that you’ve got the portability and facility of the electric cats, but the sound of the acoustic cats’ - exactly! So why don’t more people see that as quickly as Muhal did............?

Posted by Ronan Guilfoyle at 10:43 PM